The Raku Process - "Birth of a plate"

Considered the traditional method for creating bowls for the Japanese tea ceremony, Raku originated in Japan in the late 16th century. Founded by Raku Chojiro. the Raku technique and tradition has been passed down through 15 generations of the Raku family, creating a unique ceramic dynasty with over 450 years of history. 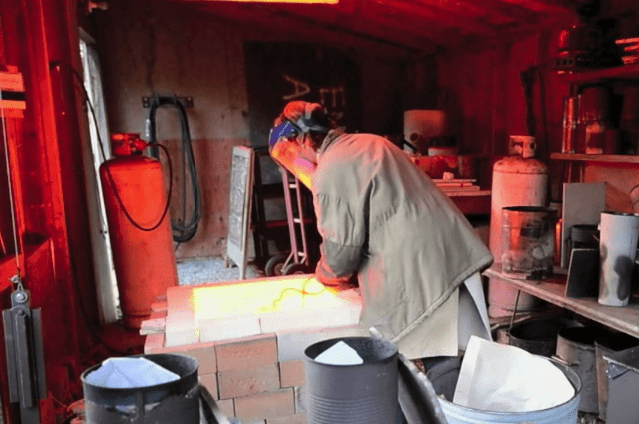 Things got really exciting in the late 1960’s when Paul Soldner introduced “post firing reduction” to the traditional Japanese method of Raku firing. Since then, the Raku technique has been adopted and modified by contemporary potters worldwide.

The Process: The magic of Raku, for me at least, lies in the unknown, and the spontaneous. Unlike most other methods for firing pottery, Raku is fast. Pots are loaded into a preheated kiln and quickly (usually 20 to 30 minutes) brought to a temperature of approximately 1800 degrees F. Very hot glowing pots are plucked out of the kiln and placed into metal containers that have been lined with a combustible material (like shredded paper). The paper immediately ignites and a lid is placed on the container to smother the flames and create a “reducing” atmosphere. In this “reducing” atmosphere smoke and fire work their magic, making each piece one of a kind..

No matter how much control is exercised during the firing process, there are so many variables at work that you just never know what you are going to get. It is this element of surprise and mystery that keeps me heading out to the kiln shed for more.

It starts with a few pounds of fresh beautiful clay.

The clay is rolled out by hand into a round slab, and designs are applied.

After an initial firing in the electric kiln, the plate is glazed and loaded into the Raku kiln.

Temperature has been reached, and the plate is ready to come out.

As quickly as possible, the plate is lifted out and placed into the metal container lined with paper.

I try not to get a "Raku haircut" as I slide a lid in place to smother the flames.

After about 30 minutes of cooling inside the metal container, it is time to inspect the results.

After all, it has had a difficult birth. Many pieces do not survive the stress of such rapid heating and cooling.
Raku is not watertight or foodsafe. Over time, direct light may affect cololurs.

Ellen was a fantastic student, and it has been a pleasure to watch her become a fantastic potter
John Chernetski was Ellen’s first pottery instructor at Malaspina College.He has 50 years experience teaching, potting, and sculpting.
In my 30 years of tile experience, I have never seen anything as unique as this Raku backsplash. It was a pleasure to install and at the end of the day, Ellen, the client and myself were all thrilled with the result. It's more than a backsplash...it's a work of art. Spectacular! I would highly recommend that you contact Ellen to explore the possibilities for creating an unforgettable, one-of-a-kind masterpiece for your own home.
Dean Haight
About 9 years ago, I saw some of Ellen's pottery in a shop in Victoria, and decided to contact her to see about doing a backsplash for my renovated kitchen. Everything was handled by email, without a single hitch or surprise. The many pieces, which were all numbered, arrived safely, complete with a comprehensive drawing for the tilesetter to follow for installation. It couldn't have been easier. The backsplash is still as beautiful as the day it was installed. I am so pleased and have received numerous compliments. I would highly recommend Ellen.
Beth
Previous
Next